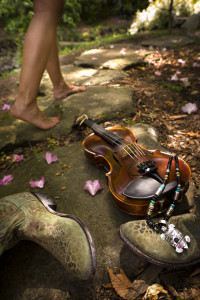 Trans-stylistic and jazz infected, “StarStuff”, her debut recording as a leader, is the fruit of her remarkable transatlantic quest, the fulfillment of a vibrant and seasoned artistic vision. Helen follows a path of “eclectic inspiration, disparate sonic influences and the realm of the Imagination.” Darol Anger, the acclaimed fiddler, has described Helen’s music as “so strong, it approaches the status of a new sentient being…. Even in the most thorny, complex episodes, we are moved to care, laugh and rejoice, washed by waves of melodic love.”

Helen’s musical inspirations are wide-ranging: from Bach to Messiaen (a fellow synaesthete), Fats Waller to Keith Jarrett and Bill Evans, from Wayne Shorter to Astronomy, Shakti to Archaeology, and Nick Drake to total Native American respect – but most importantly of all – finding time to watch the flowers grow…

Helen is an Assistant Professor of Harmony at Berklee College of Music.